Platforms like our own Symphony by Enbala do this by providing ancillary services to the grid. They  can treat cold storage rooms filled with things like frozen turkeys as though they were batteries. When there is an operating reserve event called in the grid area, we can cut the compressors that are cooling the space and rely on the thermal mass of that space – and the turkey in it - to hold the temperature for several hours until the grid is back in balance. Then we turn back on the compressors.

What we've just described is more of an industrial process, but this goes down to commercial levels, as well. We worked with one utility, for example, to evaluate resources like grocery stores in which we could align freezers use to run full out when there’s extra supply in the grid and cut back power use when the grid is constrained.

With the growth of the Internet of Things, we’ll probably be able to tap thermal storage from the refrigerator or deep freeze in your home, too. Maybe soon, your cold-storage devices – or your hot water heater – will participate in energy markets powered by DERMS and VPP platforms.

If you have a frozen turkey defrosting in the fridge, that will bump up the power of your personal cold storage even more. The average turkey packs 0.0933 kilowatt hours of stored electrical energy.

Take a look at the math provided and enjoy this tongue-in-cheek look at turkey power! And for those of you celebrating it this week, have a wonderful Thanksgiving! 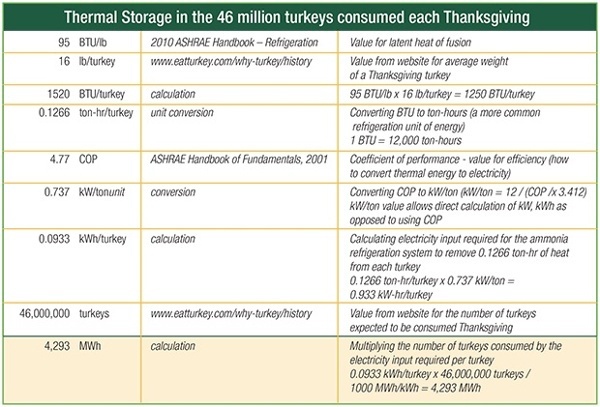